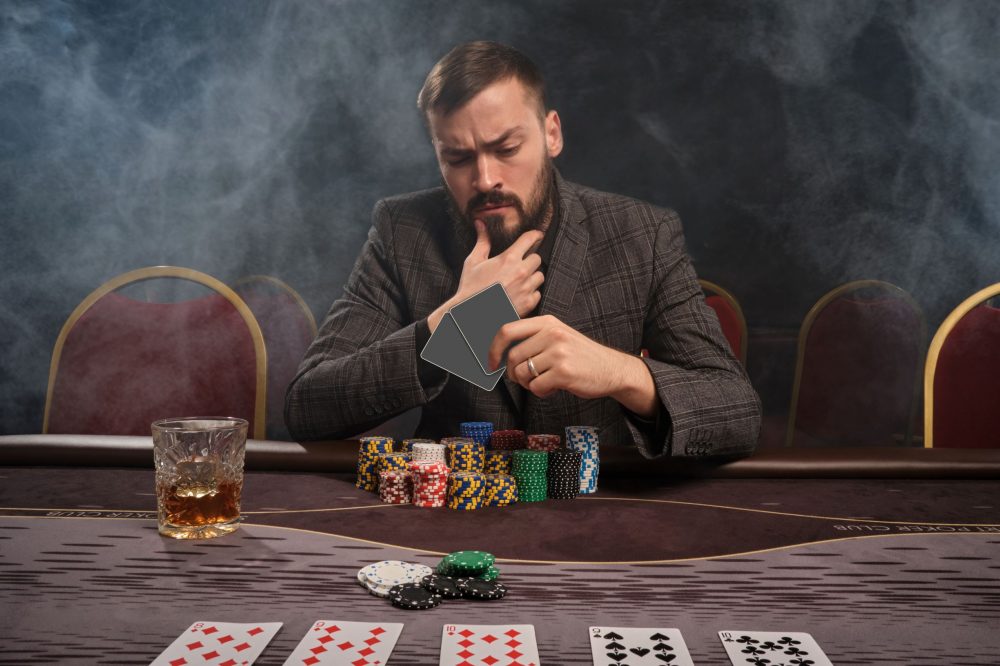 Did you ever get to see Teddy KGB munching an Oreo in Rounders? Okay, from the way Teddy ate his cookie, Matt Damon could tell how strong his hand was.

That’s just one of the times where movies just don’t work in real life.

The effectiveness of poker tells vary widely so it is essential to understand that not all players follow the same pattern.

Experienced players can have different habits than new players.

For certain cases tells are conflicting or ambiguous and it does not disclose adequate details.

Some writers published books and essays about tells. Many are too general to use but you can never really find an adversary who manifests these particular tells.

Some tells are prevalent but inaccurate, while others are rare but very trustworthy.

That being said, professional poker players often show the same live poker tells repeatedly. Here we are going to show ten of the best poker tells you should be watching for.

One of the most recognizable poker tells and is mostly used by new players. Those players who act weak are hiding a strong hand.

Quite often sighing, shrugging or a tired face suggests a strong hand. Instinctively when somebody is trying to cover a big hand, they pretend to appear weak and vulnerable.

A player who always shrugs often has a powerful hand, then don’t fall into such a trap!

This is when a player is acting like he is waiting to bet or call. It’s almost always done defensively, in an attempt to deter an opponent from betting.

Players that practice defensive chips handling and other defensive strategic behaviors are prepared to call or fold. The larger the bet, the greater the probability of the player folding.

While an adversary might call or fold on a bet, the key point is that if you’re very sure of that they are acting defensively.

Some players may have patterns relating to how loose or restrained their body is when critical bets are made. Bluffing players are usually more likely to be still than players with heavy hands.

This is connected with the basic physical instinct of “freezing,” preventing being noticed when challenged.

Keep in mind that in poker this is an overarching phenomenon and only should be followed when you have a feeling that it is right for a particular player.

This pattern frequently appears in subtle body gestures. So you should always make a mental note of your opponents’ gestures right after betting.

A player, who usually speaks a lot and unexpectedly becomes quiet, is usually given a rather strong hand.

The same applies in the case of players who do not normally speak but start babbling unexpectedly after given a hand.

With all of the poker tells, instantaneous calls could be the most helpful for both traditional and online poker games. If a player calls a bet suddenly, that means he has rejected a raise right away. Considering that players with strong hands often concentrate on maximizing interest, it’s unlikely that a strong hand can make an immediate call.

When a player with a strong hand wants to call, the decision usually takes a few seconds.

There is, therefore, typically a low or medium intensity hands suggested in immediate calls.

Immediate calls would be very useful both on and before the flop, as these are usually when bets are minuscule enough to allow players to call fast. For bigger bets, players prefer to think about these bets longer, regardless of what they have.

The second most helpful tells in poker is immediate betting, second to immediate calls. The reason, the majority of players bet with bluffs rather than solid hands.

A player who splashes out a bet or chips seems to have a weak hand most often and attempts to cover up by playing strong.

If a player is more intense when placing chips, he’s typically bluffing.

A player who stares intently at his chips or starts fumbling with them after seeing, generally have a very strong hand.

The same happens if a player looks at their chips directly after the flop is released. This means that the flop has strengthened his hand and is ready for the action.

Genuine smiles are much more authentic and effective than fake smiles in poker. A person who bets a strong hand may have a wide range of behaviors, including smiling sincerely and genuinely or not. On the other hand, it is normally hard for a bluffer to display a real, warm smile.

Acknowledging real smiles and laugh from players who have made valuable bets will enable you to realize their happiness.

Fake smiles generally become helpful only if you have certain player details on which your decision can be based on.

You can know, for example, that a player uses a fake smile when he bluffs. This could be a subconscious effort by him to express confidence. But a false smile won’t tell you too much without prior experience with a player.

A player suddenly becomes irritated and impatient during a hand frequently demonstrates that the player may hold a strong hand.

Asking questions such as “which turn is it” and asking the dealer to proceed implies that the player is in a rush to take the pot.

Tips from the Experts